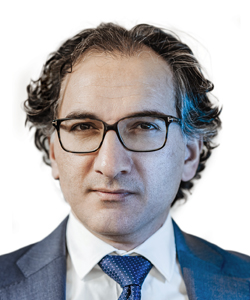 Prof. Dr. Dr. Dr. Ghanaati has performed several translational studies (preclinical and clinical) with special focus on biomaterial-related cellular reaction and regeneration capacity. Since 2005, he has extensively studied the inflammatory pattern and regeneration capacity of biomaterials with respect to different physicochemical properties. Thereby, he performed research and accompanied the development of over 10 biomaterials from bench to the clinic. He developed a biomaterial-based technique for extraoral skin regeneration, which received 510 (k) in USA in 2017. Presently, he is a research consultant for the world’s leading manufacturer of biomaterials. In 2009 he founded the FORM-Lab (Frankfurt Orofacial Regenerative Medicine, www.form-frankfurt.de), the research laboratory of the Clinic of Oral, Cranio-Maxillofacial and Plastic Surgery, Johann Wolfgang Goethe University Frankfurt, and leads it ever since. In FORM, he manages a working group of scientists and clinicians, who perform basic science and clinical studies focusing on understanding the biomaterial-based regeneration process and aspects of vascularization in management of soft and bone tissue regeneration. In 2010, he started to develop advanced preparation protocols of platelet rich fibrin (PRF) together with Dr. Joseph Choukroun, the founder of PRF. In 2016, Prof. Ghanaati and his team established the so-called LSCC (Low Speed Centrifugation Concept) for PRF-derived blood concentrates to gain a highly bioactive autologous drug delivery system. This development led to the establishment of an AWMF S3-guideline for use of PRF in oral dentistry.

Prof. Dr. Dr. Dr. Ghanaati preformed more than 80 lectures at national and international congresses and gave more than 40 courses and workshops on GTR & GBR in implantology as well as on regenerative concepts and blood concentrates. Up to now he has published more then 150 peer-reviewed publications, with a respective H-Index of 34 and a cumulative impact factor exceeding 385, in the field of regenerative and reconstructive medicine and research covering a whole translational research chain from basic in vitro research, to animal in vivo research, and finally in clinical studies and trials.